Of course I decide to start this blog during one of the most EXCITING, CHALLENGING, and HISTORICAL weeks during my lifetime. I’m from South Carolina, so not only are we having to deal with Dylann Roof and his racist/terrorist actions in Charleston, but now idiots blaming the confederate flag for that racism. It’s a flag. It represents southern history (and not slavery). If you want to know the TRUE history of the flag and its meanings, do some research. That is all I have to say about that. Now on to more important things. 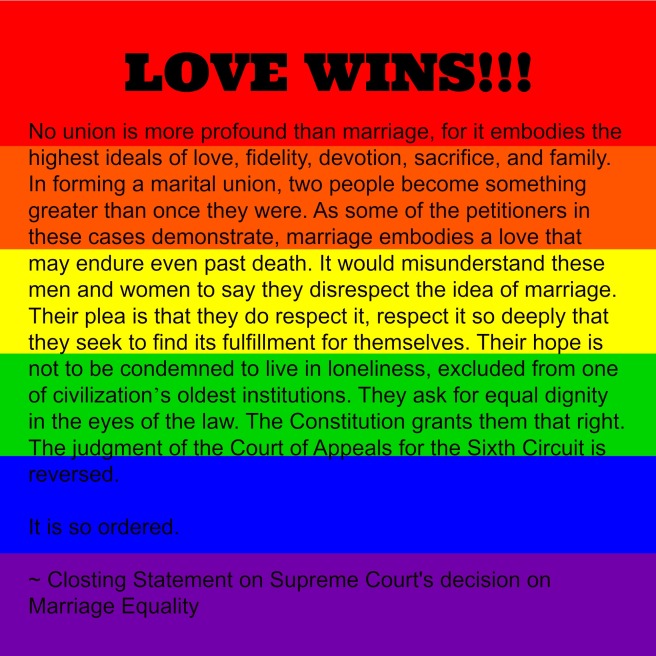 No union is more profound than marriage, for it embodies the highest ideals of love, fidelity, devotion, sacrifice, and family. In forming a marital union, two people become something greater than once they were. As some of the petitioners in these cases demonstrate, marriage embodies a love that may endure even past death. It would misunderstand these men and women to say they disrespect the idea of marriage. Their plea is that they do respect it, respect it so deeply that they seek to find its fulfillment for themselves. Their hope is not to be condemned to live in loneliness, excluded from one of civilization’s oldest institutions. They ask for equal dignity in the eyes of the law. The Constitution grants them that right. The judgment of the Court of Appeals for the Sixth Circuit is reversed.

It is so ordered.

Friday, June 26, 2015 was a huge day for Americans, HUGE DAY!!! This is not meant to stir the pot on your homosexual beliefs. This is about LEGALIZING ALL MARRIAGES!!! You can be against the LGBT community all you want, but the fact of the matter is this historic decision has pushed Americans toward being TRULY capable of reaching

life, liberty, and the pursuit of happiness!

I am not gay. I may be bi-sexual but I am happily married to my husband…and that is not even the point. I will not defend my opinion or this historic decision. It has been done. LONG LIVE MARRIAGE ( 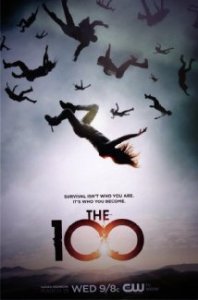 Second, I started watching a new show on Netflix called, The 100. It was actually VERY interesting. Enough so to keep me up until 6 am watching it when I had to be up with my kids 2 hours later hahaha

HOWEVER, I just found out that after all those hours of falling in love with the two main characters, ONE OF THEM DIES in the second season. I HATE shows that do that. You can like them all you want. I DO NOT. Therefore I quit watching the show. But that’s one of the reasons, also, that I have not written in a few days. Too interested in that damn show!

Third, I’ve been trying out some new things for the blog! If I disappear for a few days it’s because of these reasons:

Wow, after rereading this I have to say it doesn’t seem like much has happened, but I have been dealing with drama, hate, whining, and CELEBRATION for all of my friends. It is very tough to stay friends and respect others when they do not show you respect in return. All of this negative junk going on in this country is really starting to shed the light on everyone’s TRUE COLORS.

But for now, I bleed rainbow…for my LGBT community friends and ALL Americans! 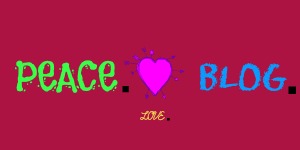